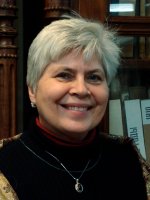 Myroslava M. Mudrak is Professor Emeritus of Art History at The Ohio State University, specializing in Russian and Ukrainian avant-garde art of the 1910s and 1920s. A native-born Ohioan, Prof. Mudrak was raised in the Ukrainian immigrant community of Cleveland, which shaped her identity as a Ukrainian-American. In her professional life, Prof. Mudrak has traveled extensively and regularly to Ukraine since the fall of the USSR and has been to Crimea four times since 1992. Under the Soviets, during the 1977-78 academic year, she conducted research, supported by IREX (International Research and Exchanges) in Kyiv and other cities of Ukraine and Russia, including Odessa, where she first discovered the Ukrainian artistic underground. In 1979, she helped to organize and wrote the catalogue essay for the first international exhibition of contemporary art from Ukraine, a touring exhibition that took place in Munich, London, Paris, and New York. More recently, as a Fulbright scholar based in Kharkiv during 2008-2009, she focused on Ukraine’s cultural renaissance of the 1920s, which was brought down by Stalin during the purges of the 1930s. Her publications include the award-winning book, The New Generation and Artistic Modernism in the Ukraine (1986), Beyond Borders: Modern Ukrainian Book Design 1914-1945 (2008), and Borys Kosarev: Modernist Kharkiv 1915-1931 (2011).