Review of Rivers and the Power of Ancient Rome, by Brian Campbell (Chapel Hill: The University of North Carolina Press, 2012)
By

Benjamin Franklin famously quipped “when the well is dry, we learn the worth of water.”

What was the worth of water in Ancient Rome? Floating along the extraordinarily diverse rivers of the Roman world, historian Brian Campbell tells us that the answer is a lot.

Rivers, he argues, flowed at the very core of Roman life: their religious worldviews and understandings of divinity, economic practices, legal systems, art and literature, drinking and farming, and their modes of transportation for people and goods. Rivers were crucial to mapping, boundary making, and control of territory and were found at the heart of Roman ideas and practices of health, healing, sexuality, and leisure. Rivers were crucial to Roman territorial aggrandizement and their military systems. They served as symbols of strength and domination, of cooperation and conquest. 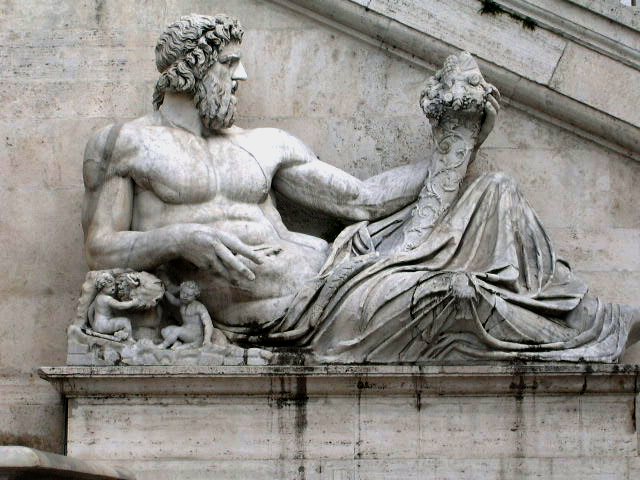 Roman representation of Tiber as a god (Tiberinus) with cornucopia at the Campidoglio, Rome.

Stretching across three continents and framing the Mediterranean Sea, the long-lasting and expansive Roman polity and its people lived in a wide range of watery environments, from the dry regions of Spain and the Levant to the wetlands of Italy and Britain. The Roman world included some of the most remarkable rivers in the European, Middle Eastern, and African worlds: from the Nile, Tigris, and Euphrates, to the Rhine, Rhone, Danube, Po, Tiber, and Seine.

Campbell sets himself a daunting task of writing the history of rivers across the length and breadth of Rome from the first century CE onwards. But he achieves admirably in bringing the riverine worlds to life. 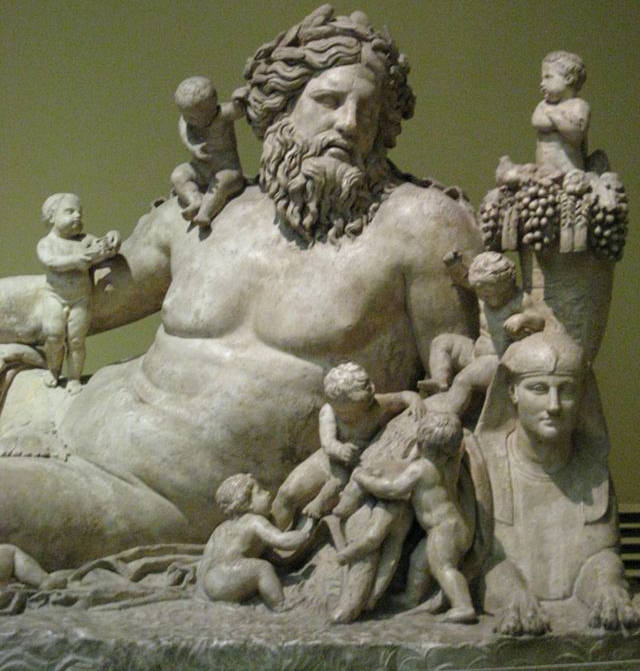 Statue personifying the River Nile and his children, from the Temple of Serapis and Isis in Rome, dated to the 1st century CE

Rivers and streams, he writes, all had their resident spirit; “great rivers had correspondingly important anthropomorphic deities, who led exciting and eventful lives in mythological stories, [and] this religious aura of rivers enhanced the status of riverine communities” (31). Rivers were ascribed human qualities and emotions, and often fathered children.

They also healed. Romans cherished the “cleansing force of running water” and this was “combined with [the] recognition of aquatic healing power especially in thermal springs.” The great Cicero pronounced “As long as a man is at the waters he is never dead” (367).

While the author tells us a great deal about shared riverine trends and connections across the whole Roman empire, he is always mindful of the ways in which the history of rivers also tells us “more personal, individual stories” (xiv). Rivers in the ancient world were lived and experienced in very local, site-specific ways. The annual flood on the Nile was an occasion for joy and celebration that would bring great harvests; yet floods on the Rhine were condemned and lamented for their destruction.

The study of Roman rivers comes with difficulties, however. There are only so many sources remaining today for the historian to gnaw on. And, in terms of terminology, just what was a “river” was perhaps less apparent than we might imagine. Romans had many definitions of a river and used different words depending on a myriad of variables: amnis, flumen, fluvius, torrens, rivus, fons, and the list goes on (34).

“I compelled the rivers to flow wherever I wanted, and I wanted them (to flow) wherever it was beneficial. I taught the barren land how to be cultivated for I touched it with my own rivers.”
—from Polyaenus’s Strategemata, recounting the triumphs of Queen Semiramis (369)

In this Gallo-Roman relief, a man transports wine barrels via river.

Rivers are unpredictable, often vengeful creatures. They flood, rage, and destroy. They dry up (seasonably or for long years), leaving land, plants, and people parched. And they change course and move from year to year, silting up, jumping their banks, carving new paths, and shifting their beds often over long distances. Romans, like most humans over the past several thousand years, struggled both to respond to rivers’ variability and to tame their volatility.

The story of Roman rivers is the story of a people (who were very much used to control) striving to regularize waters that were by nature irregular, both to ensure survival and economic benefit and also to manifest power. “Rivers,” Campbell writes, “were among the natural phenomena over which the Romans consciously sought mastery in one way or another. One of the most potent symbols of their control was their ability to take fresh running water from one place and deposit it by aqueduct in the center of a distant city” (30). Roman leaders considered “control over natural forces” and use of “this power to bestow benefits” on their citizens to be core activities of rulership. “Control over a river [was] a demonstration and confirmation of imperial power”—a broadcasting of the glories of Rome for all to see (369).

Yet, in the final tally and despite extensive building projects (dams, embankments, irrigation systems, drying wetlands), the Roman story of rivers was an “ultimate failure to master them” (13). Indeed, in one of the most intriguing chapters, Campbell describes the extensive legal statutes that existed to deal with the problem of rivers moving and changing course. The laws themselves are evidence enough of the ongoing struggle to “master” rivers.

Who, Roman jurists and surveyors asked themselves, owns the soil that is transported away when a flood comes through a farm? Who owns the land that appears when an island is formed by a river changing course or when years of a river dropping silt leaves behind newly dry land? What compensation can a landholder expect when his land suddenly disappears under water or his fields are cut in half by a migrating river? These questions were pressing because Romans considered rivers public property even as they flowed through and over private lands.

Rivers and the Human Experience

Despite unveiling the remarkably important function of rivers in the Roman world through prodigious research, Campbell’s book nonetheless remains less than the sum of its parts. It tells marvelous stories and lays out intriguing and engaging examples of the myriad ways in which rivers flowed through the very heart of Roman life. But a larger synthesis and analysis eludes the author. 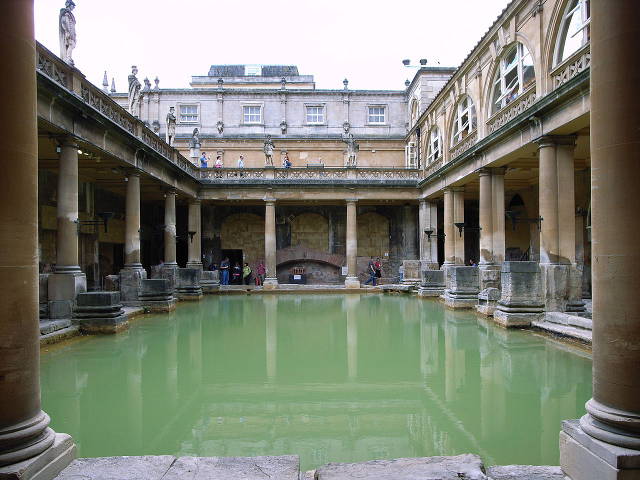 What, we should ask of Campbell, does all this wateriness mean, not only for our understandings of Roman history but also for today? And what do we learn about the ways in which the human-water interaction defines and channels human life? This latter question is especially important to our present day. How, we should try to learn from the past, will changes in the human relationship to water (and its flora, fauna, hydrology, and geology) affect present and future human lifeways? The author is unfortunately not forthcoming on these larger questions.

The worlds of Roman rivers remind us that water is more than simply a material object crucial to human life, but also an ever-evolving cultural touchstone that has long stood at the foundation of the human experience. To understand our relationship to water is in many ways to understand the very essence of who we are as a species. 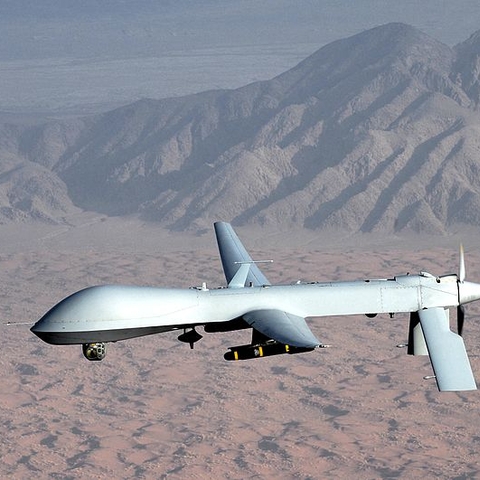 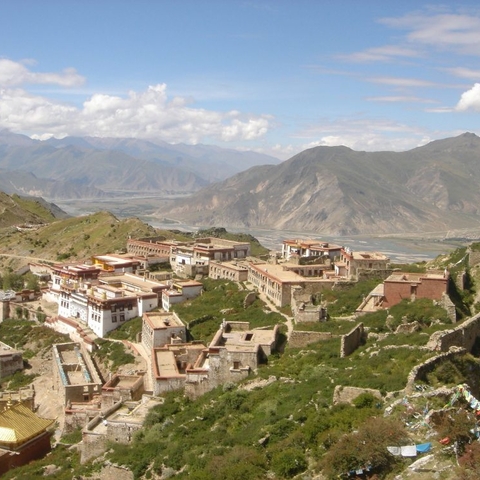 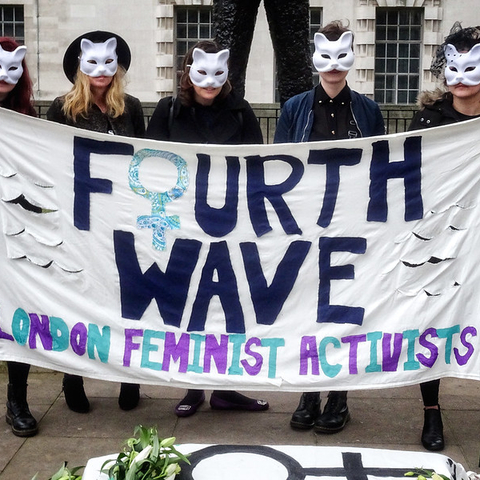 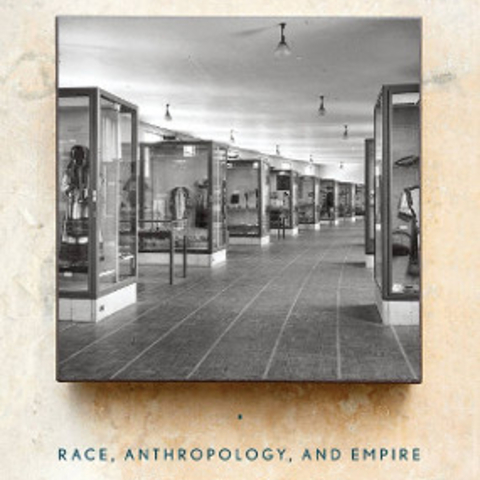